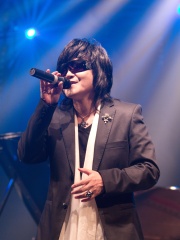 Toshimitsu Deyama (Japanese: 出山 利三, Hepburn: Deyama Toshimitsu, born October 10, 1965), known exclusively by his stage name Toshi, is a Japanese singer who is the lead vocalist and a co-founder of the rock band X Japan, who rose to prominence in the late 1980s and early 1990s and is credited as founders of the visual kei movement. Toshi began an extensive solo career in 1992 before leaving X Japan at the end of 1997. Toshi laments he was "brainwashed" by a group called Home of Heart, whose leader would control his musical output for the next 12 years. Read more on Wikipedia

Page views of Toshis by language