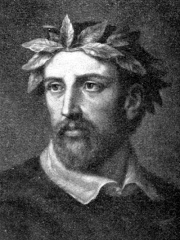 Torquato Tasso ( TASS-oh, also US: TAH-soh, Italian: [torˈkwaːto ˈtasso]; 11 March 1544 – 25 April 1595) was an Italian poet of the 16th century, known for his 1591 poem Gerusalemme liberata (Jerusalem Delivered), in which he depicts a highly imaginative version of the combats between Christians and Muslims at the end of the First Crusade, during the Siege of Jerusalem of 1099. Tasso suffered from mental illness and died a few days before he was to be crowned on the Capitoline Hill as the king of poets by Pope Clement VIII. Read more on Wikipedia

Torquato Tasso is most famous for his epic poem "The Gerusalemme Liberata" which tells the story of the First Crusade.

Among people born in 1544, Torquato Tasso ranks 3. Before him are Francis II of France and William Gilbert. After him are Ismihan Sultan, Anna of Saxony, Renata of Lorraine, Maria Temryukovna, Sigismund Rákóczi, Gillis van Coninxloo, and Guillaume de Salluste Du Bartas. Among people deceased in 1595, Torquato Tasso ranks 3. Before him are Murad III and Philip Neri. After him are Ferdinand II, Archduke of Austria, Mohammad Khodabanda, Archduke Ernest of Austria, John Hawkins, Álvaro de Mendaña de Neira, António, Prior of Crato, Thoinot Arbeau, Jeremias II of Constantinople, and John Frederick II, Duke of Saxony.