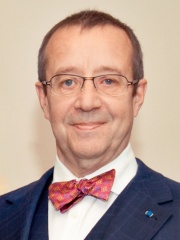 Toomas Hendrik Ilves (Estonian pronunciation: [ˈtoːmɑs ˈhendrik ˈilves]; born 26 December 1953) is an Estonian politician who served as the fourth president of Estonia from 2006 until 2016. Ilves worked as a diplomat and journalist, and he was the leader of the Social Democratic Party in the 1990s. He served in the government as Minister of Foreign Affairs from 1996 to 1998 and again from 1999 to 2002. Read more on Wikipedia

Among politicians, Toomas Hendrik Ilves ranks 4,581 out of 15,710. Before him are Aristobulus I, Stepan Shaumian, Ben Carson, Madame Nhu, Amyntas I of Macedon, and Takahito, Prince Mikasa. After him are Cyril Ramaphosa, Sviatoslav II of Kiev, Aristides Pereira, Cynisca, Tancredo Neves, and Honoré IV, Prince of Monaco.