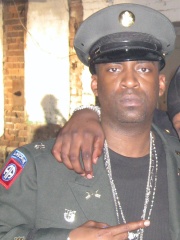 Marvin Bernard (born March 31, 1978), better known by his stage name Tony Yayo, is an American rapper and hype man. He is best known as a member of G-Unit, a hip hop group he formed with his childhood friends 50 Cent and Lloyd Banks. Yayo released his debut studio album, Thoughts of a Predicate Felon, in 2005, which debuted at number 2 on the Billboard Hot 100. Read more on Wikipedia

Since 2007, the English Wikipedia page of Tony Yayo has received more than 844,492 page views. His biography is available in 23 different languages on Wikipedia making him the 2,197th most popular singer.

Among singers, Tony Yayo ranks 2,207 out of 3,001. Before him are Yelawolf, Charlotte Wessels, Anmary, Hannah Mancini, Karoline Krüger, and Maria Rita. After him are Kool G Rap, Luísa Sobral, Filipa Azevedo, Eunha, Anna Bergendahl, and Emmy.