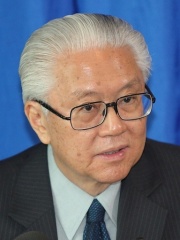 Tony Tan Kheng Yam (born 7 February 1940) is a Singaporean politician who was the seventh President of Singapore & the commander-in-chief of the Singapore Armed Forces holding office from 2011 to 2017 after winning the 2011 Singaporean presidential election with 35.20% of the votes, winning by a narrow 0.34% margin over Tan Cheng Bock when former president S.R. Nathan stepped down from the position. Tan was sworn in as president on 1 September 2011 and held office until 31 August 2017. Read more on Wikipedia

Since 2007, the English Wikipedia page of Tony Tan has received more than 1,048,442 page views. His biography is available in 42 different languages on Wikipedia making him the 6,030th most popular politician.