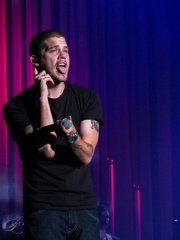 Anthony Michael "Tony" Oller (born February 25, 1991) is an American singer, songwriter and actor. He had roles as Walt Moore on the TeenNick TV show Gigantic, and as Danny on Disney Channel's As the Bell Rings. He appeared in the films Beneath the Darkness and The Purge. Read more on Wikipedia

Since 2007, the English Wikipedia page of Tony Oller has received more than 516,406 page views. His biography is available in 16 different languages on Wikipedia making him the 8,637th most popular actor.