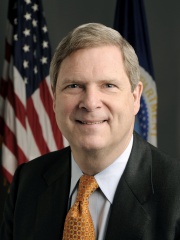 Thomas James Vilsack (; born December 13, 1950) is an American politician and lawyer who served as the United States Secretary of Agriculture from January 2009 until January 2017. A member of the Iowa Democratic Party, Vilsack also served as the 40th Governor of Iowa from 1999 to 2007. On November 30, 2006, he formally launched his candidacy for nomination for President of the United States by the Democratic Party in the 2008 election, but ended his bid on February 23, 2007.Barack Obama announced Vilsack's selection to be Secretary of Agriculture on December 17, 2008. Read more on Wikipedia

Since 2007, the English Wikipedia page of Tom Vilsack has received more than 601,685 page views. His biography is available in 23 different languages on Wikipedia making him the 13,757th most popular politician.