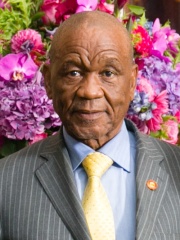 Thomas Motsoahae Thabane (born 28 May 1939) is a Mosotho politician who was the Prime Minister of Lesotho from 2012 to 2015 and from 2017 to 2020. He is leader of the All Basotho Convention (ABC) political party. Thabane served in the government of Prime Minister Pakalitha Mosisili from 1998 to 2006 as a member of the ruling Lesotho Congress for Democracy (LCD), but in 2006 he split from the LCD and launched the All Basotho Convention (ABC). Read more on Wikipedia

Among politicians, Tom Thabane ranks 8,102 out of 15,710. Before him are Odo of Bayeux, Herbert I, Count of Vermandois, Geoffrey II of Villehardouin, Poul Schlüter, Friedrich Ferdinand von Beust, and Louis VI, Landgrave of Hesse-Darmstadt. After him are John VII of Constantinople, Frederick III, Duke of Austria, Ludwika Karolina Radziwiłł, Theodoric I, Duke of Upper Lorraine, False Dmitry III, and Beatrice of Vermandois.

Others born in Lesotho

Among POLITICIANS In Lesotho