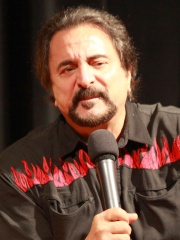 Thomas Vincent Savini (born November 3, 1946) is an American prosthetic makeup artist, actor, stunt performer and film director. He is known for his makeup and special effects work on many films directed by George A. Romero, including Martin, Dawn of the Dead, Day of the Dead, Creepshow and Monkey Shines; he also created the special effects and makeup for many cult classics like Friday the 13th (parts I and IV), Maniac, The Burning, The Prowler and The Texas Chainsaw Massacre 2. Savini directed Night of the Living Dead, the 1990 remake of Romero's 1968 Night of the Living Dead; his other directing work includes three episodes of the TV show Tales from the Darkside and one segment in The Theatre Bizarre. Read more on Wikipedia