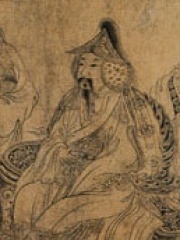 Toghon Temür (Mongolian: Тогоонтөмөр, Togoontömör; Mongol script: ᠲᠤᠭᠤᠨᠲᠡᠮᠤᠷ ᠬᠠᠭᠠᠨ; Chinese: 妥懽貼睦爾; pinyin: tuohuantiemu'er; 25 May 1320 – 23 May 1370), also known by the temple name Huizong (Chinese: 惠宗) bestowed by the Northern Yuan dynasty and by the posthumous name Emperor Shun (Chinese: 順帝; Wade–Giles: Shun-ti) bestowed by the Hongwu Emperor of the Ming dynasty, was a son of Khutughtu Khan Kusala who ruled as emperor of the Yuan dynasty. Apart from Emperor of China, he is also considered the last Khagan of the Mongol Empire.During the last years of his reign, the Yuan dynasty was overthrown by the Red Turban Rebellion, which established the Ming dynasty, although Yuan remnants remained in control of northern China and the Mongolian Plateau. Read more on Wikipedia

Togon Temür is most famous for being the last emperor of the Yuan Dynasty.

Among politicians, Toghon Temür ranks 1,666 out of 15,710. Before him are Meñli I Giray, Hu Yaobang, Emperor Jing of Han, Agesilaus II, Anchises, and Jean-Claude Juncker. After him are Otto of Greece, Dzhokhar Dudayev, Antonio López de Santa Anna, Egon Krenz, Ptolemy VII Neos Philopator, and Carlos I of Portugal.

Among people born in 1320, Toghon Temür ranks 3. Before him are Valdemar IV of Denmark and Peter I of Portugal. After him are Bertrand du Guesclin, Vukašin of Serbia, Blanche of Namur, John Hawkwood, Beatrice of Bourbon, Queen of Bohemia, Galeazzo II Visconti, Cápac Yupanqui, Ragibagh Khan, and Louis I of Naples. Among people deceased in 1370, Toghon Temür ranks 3. Before him are Pope Urban V and Casimir III the Great.