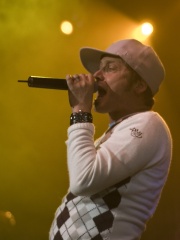 Toby McKeehan (born Kevin Michael McKeehan; October 22, 1964), better known by his stage name TobyMac (styled tobyMac or TOBYMAC), is an American Christian hip hop rapper and singer. He has charted 20 solo singles on Billboard's Christian Songs list. He was first known for being a member of the Christian rap and rock trio DC Talk, staying with them from 1987 until they went on hiatus in 2000. Read more on Wikipedia

Page views of TobyMacs by language

Among singers, TobyMac ranks 2,706 out of 3,541. Before him are Daniel Diges, Pras, Arisa, Soyou, Hyolyn, and Miles Kane. After him are Glukoza, Emmanuel Moire, Zoë, Afroman, Suzy, and Samy Deluxe.