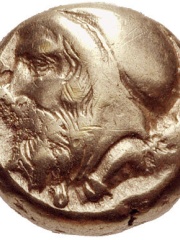 Tissaphernes (Ancient Greek: Τισσαφέρνης; Old Persian Čiçafarnah, Aramaic Ššprn, Lycian Kizzaprñna, Zisaprñna) (445 BC – 395 BC) was a Persian soldier and statesman, Satrap of Lydia. His life is mostly known from the magistral works of Thucydides and Xenophon. Read more on Wikipedia

Tissaphernes was most famous for his betrayal of Cyrus the Great.

Page views of Tissaphernes by language

Among politicians, Tissaphernes ranks 3,604 out of 15,710. Before him are Bolesław Bierut, Princess Alexandra of Saxe-Altenburg, David Dacko, Emperor Xianzong of Tang, Lycurgus of Athens, and Abdur Rahman Khan. After him are Emilio Mola, Kavad II, Boris Tadić, Redbad, King of the Frisians, Robert I, Count of Artois, and John Hyrcanus.

Others Deceased in 395 BC