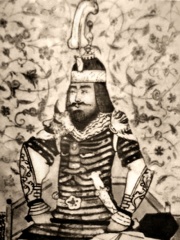 Timur (Chagatay: تيمور Temür, lit. 'Iron'; 9 April 1336 – 17–19 February 1405), later Timūr Gurkānī (Chagatay: تيمور کورگن Temür Küregen), was a Turco-Mongol conqueror who founded the Timurid Empire in and around modern-day Afghanistan, Iran and Central Asia, becoming the first ruler of the Timurid dynasty. An undefeated commander, he is widely regarded as one of the greatest military leaders and tacticians in history. Read more on Wikipedia

Since 2007, the English Wikipedia page of Timur has received more than 8,068,726 page views. His biography is available in 128 different languages on Wikipedia (up from 127 in 2019). Timur is the 4th most popular military personnel, the 2nd most popular biography from Uzbekistan and the most popular Military Personnel.

Timur was a 14th century conqueror who conquered much of Central Asia, Persia, and the Middle East. He is most famous for the capture of Baghdad in 1393.

Page views of Timurs by language

Among military personnels, Timur ranks 4 out of 1,468. Before him are Genghis Khan, Alexander the Great, and Joan of Arc. After him are Charles de Gaulle, Karl Dönitz, Spartacus, Erwin Rommel, Charles Martel, Adolf Eichmann, Themistocles, and William Wallace.

Among MILITARY PERSONNELS In Uzbekistan