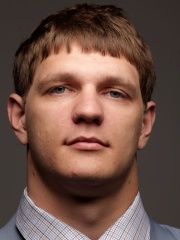 Timofey Pavlovich Mozgov (Russian: Тимофей Павлович Мозгов, IPA: [tʲɪmɐˈfʲej mɐˈzɡof], born July 16, 1986) is a Russian professional basketball player for Khimki of the VTB United League and the EuroLeague. Mozgov won an NBA championship with the Cleveland Cavaliers in 2016, becoming one of the first Russians to do so, alongside Sasha Kaun. As a member of the Russian national team, he won the bronze medal at the 2012 Summer Olympics, as well as a bronze medal at EuroBasket 2011. Read more on Wikipedia

Since 2007, the English Wikipedia page of Timofey Mozgov has received more than 1,287,044 page views. His biography is available in 27 different languages on Wikipedia making him the 257th most popular basketball player.

Among BASKETBALL PLAYERS In Russia