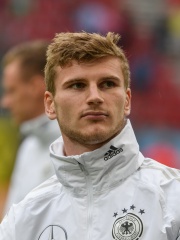 Timo Werner (German pronunciation: [ˈtiːmoː ˈvɛɐ̯nɐ]; born 6 March 1996) is a German professional footballer who plays as a striker for English Premier League club Chelsea and the Germany national team. Upon making his senior debut in 2013, Werner became the youngest player ever to represent VfB Stuttgart and later became the club's youngest ever goalscorer. He made over 100 appearances for Stuttgart before joining RB Leipzig in 2016 for a then-club record fee of €10 million. Read more on Wikipedia

Since 2007, the English Wikipedia page of Timo Werner has received more than 3,300,646 page views. His biography is available in 46 different languages on Wikipedia making him the 2,576th most popular soccer player.