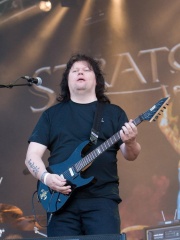 Timo Tapio Tolkki (born 3 March 1966) is a Finnish musician best known as the former guitarist, singer, songwriter and producer of the power metal band Stratovarius. With his tenure lasting for more than twenty years, he was the longest standing member of the band before his departure in 2008. After leaving Stratovarius he formed two supergroups named Revolution Renaissance and Symfonia, both of which have since disbanded. Read more on Wikipedia

Since 2007, the English Wikipedia page of Timo Tolkki has received more than 240,995 page views. His biography is available in 18 different languages on Wikipedia making him the 1,078th most popular musician.

Among MUSICIANS In Finland