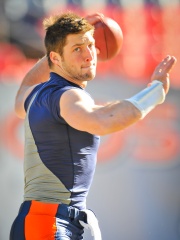 Timothy Richard Tebow (; born August 14, 1987) is an American football tight end who is a free agent. He previously played three seasons in the National Football League (NFL) as a quarterback for the Denver Broncos and the New York Jets. Tebow played college football at Florida where he became the first sophomore to win the Heisman Trophy and led his team to two BCS National Championship victories in the 2006 and 2008 seasons. Read more on Wikipedia

Since 2007, the English Wikipedia page of Tim Tebow has received more than 13,328,930 page views. His biography is available in 20 different languages on Wikipedia (up from 19 in 2019). Tim Tebow is the 35th most popular american football player, the 85th most popular biography from Philippines (down from 58th in 2019) and the most popular Filipino American Football Player.

Among AMERICAN FOOTBALL PLAYERS In Philippines