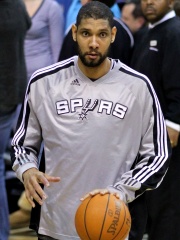 Timothy Theodore Duncan (born April 25, 1976) is an American former professional basketball player and coach. Nicknamed "the Big Fundamental", he is widely regarded as the greatest power forward of all time and one of the greatest players in NBA history. He spent his entire 19-year playing career with the San Antonio Spurs. Duncan started out as an aspiring swimmer and only began playing basketball in ninth grade, when Hurricane Hugo destroyed the only available Olympic-sized pool in his homeland of Saint Croix, U.S. Read more on Wikipedia

Others born in U.S. Virgin Islands

Among basketball players born in U.S. Virgin Islands, Tim Duncan ranks 1. After him are Raja Bell (1976).