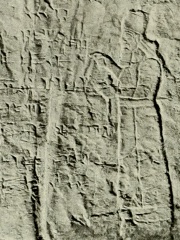 Tiglath-Pileser I (; from the Hebraic form of Akkadian: 𒆪𒋾𒀀𒂍𒈗𒊏, romanized: Tukultī-apil-Ešarra, "my trust is in the son of Ešarra") was a king of Assyria during the Middle Assyrian period (1114–1076 BC). According to Georges Roux, Tiglath-Pileser was "one of the two or three great Assyrian monarchs since the days of Shamshi-Adad I". He was known for his "wide-ranging military campaigns, his enthusiasm for building projects, and his interest in cuneiform tablet collections". Read more on Wikipedia

Tiglath-pileser I is most famous for his military campaigns, in which he conquered all of Mesopotamia, Syria, and Palestine. He also conquered the lands of the Amorites, the Philistines, and the Arameans.

Page views of Tiglath-Pileser IS by language

Among politicians, Tiglath-Pileser I ranks 1,866 out of 15,710. Before him are Rodolfo Graziani, Joseph I of Portugal, Laurent-Désiré Kabila, Agostinho Neto, Ashurnasirpal II, and Hotepsekhemwy. After him are Archduke Maximilian Francis of Austria, Gurbanguly Berdimuhamedow, Julia Drusilla, Michael the Brave, Mohammed Daoud Khan, and Francis, Duke of Anjou.