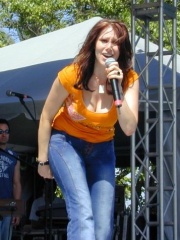 Tiffany (born Tiffany Renee Darwish; October 2, 1971) is an American singer, songwriter, actress, and former teen icon. She is most notable for her 1987 cover of the song "I Think We're Alone Now", originally recorded in 1967 by Tommy James and the Shondells, and released as the second single from her album, Tiffany. Thanks to an original mall tour, "The Beautiful You: Celebrating The Good Life Shopping Mall Tour '87", Tiffany found commercial success; both the single and the album peaked at No. Read more on Wikipedia

Since 2007, the English Wikipedia page of Tiffany Darwish has received more than 2,287,099 page views. Her biography is available in 21 different languages on Wikipedia making her the 1,656th most popular singer.