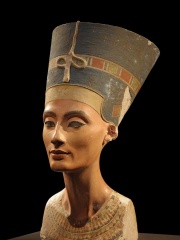 Thutmose, also known as "The King's Favourite and Master of Works, the Sculptor Thutmose" (also spelled Djhutmose, Thutmosis, and Thutmes), was an Ancient Egyptian sculptor. He flourished around 1350 BC, and is thought to have been the official court sculptor of the Egyptian pharaoh Akhenaten in the latter part of his reign. A German archaeological expedition digging in Akhenaten's deserted city of Akhetaten, known today as Amarna, found a ruined house and studio complex (labeled P47.1-3) in early December 1912; the building was identified as that of Thutmose based on an ivory horse blinker found in a rubbish pit in the courtyard inscribed with his name and job title. Read more on Wikipedia

Since 2007, the English Wikipedia page of Thutmose has received more than 79,470 page views. His biography is available in 20 different languages on Wikipedia (up from 19 in 2019). Thutmose is the 93rd most popular sculptor (down from 89th in 2019), the 313th most popular biography from Egypt (down from 307th in 2019) and the most popular Egyptian Sculptor.

Page views of Thutmoses by language

Among sculptors, Thutmose ranks 93 out of 189. Before him are César Baldaccini, Apollonius of Tralles, Polykleitos the Younger, Dan Flavin, Adolf von Hildebrand, and Leone Leoni. After him are Germain Pilon, Antonio Rossellino, Anna Mahler, Aleijadinho, Antoine-Louis Barye, and Lorenzo Bartolini.

Among people born in 1500 BC, Thutmose ranks 13. Before him are Tudḫaliya I, Mutemwiya, Xiao Xin, Tahurwaili, Yang Jia of Shang, and Zu Ding. After him are Nan Geng, Tiaa, Hantili II, Huzziya II, Rekhmire, and Kurigalzu I.

Among SCULPTORS In Egypt