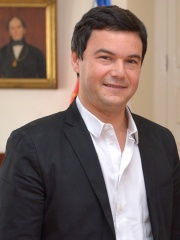 Thomas Piketty (French: [tɔ.ma pi.kɛ.ti]; born 7 May 1971) is a French economist who is Professor of Economics at the School for Advanced Studies in the Social Sciences (EHESS), Associate Chair at the Paris School of Economics and Centennial Professor of Economics in the International Inequalities Institute at the London School of Economics. Piketty's work focuses on public economics, in particular income and wealth inequality. He is the author of the best-selling book Capital in the Twenty-First Century (2013), which emphasises the themes of his work on wealth concentrations and distribution over the past 250 years. Read more on Wikipedia

Since 2007, the English Wikipedia page of Thomas Piketty has received more than 1,174,485 page views. His biography is available in 42 different languages on Wikipedia making him the 191st most popular economist.