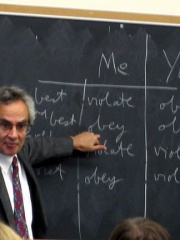 Thomas Nagel (; born July 4, 1937) is an American philosopher. He is University Professor of Philosophy and Law, Emeritus, at New York University, where he taught from 1980 to 2016. His main areas of philosophical interest are legal philosophy, political philosophy, and ethics.Nagel is known for his critique of material reductionist accounts of the mind, particularly in his essay "What Is It Like to Be a Bat?" (1974), and for his contributions to liberal moral and political theory in The Possibility of Altruism (1970) and subsequent writings. Read more on Wikipedia

Among philosophers, Thomas Nagel ranks 504 out of 1,081. Before him are Valentinus, Peter Deunov, Émile Chartier, Yan Hui, Theodorus the Atheist, and Kenneth Waltz. After him are Axel Honneth, Tom Regan, Bion of Borysthenes, A. J. Ayer, Hasdai Crescas, and Murray Bookchin.

Among PHILOSOPHERS In Serbia

Among philosophers born in Serbia, Thomas Nagel ranks 1. After him are Svetozar Marković (1846).