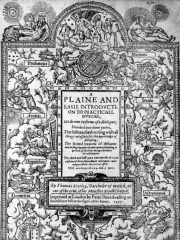 Thomas Morley (1557 – early October 1602) was an English composer, theorist, singer and organist of the Renaissance. He was one of the foremost members of the English Madrigal School. Referring to the strong Italian influence on the English madrigal, The New Grove Dictionary of Music and Musicians states that Morley was "chiefly responsible for grafting the Italian shoot on to the native stock and initiating the curiously brief but brilliant flowering of the madrigal that constitutes one of the most colourful episodes in the history of English music."Living in London at the same time as Shakespeare, Morley was the most famous composer of secular music in Elizabethan England. Read more on Wikipedia

Among people born in 1557, Thomas Morley ranks 11. Before him are Sophie of Mecklenburg-Güstrow, Stephen Bocskai, Balthasar Gérard, Oda Nobutada, Lew Sapieha, and Frederick I, Duke of Württemberg. After him is Jean de Sponde. Among people deceased in 1602, Thomas Morley ranks 10. Before him are Emilio de' Cavalieri, Abu'l-Fazl ibn Mubarak, Ii Naomasa, Li Zhi, Friedrich Wilhelm I, Duke of Saxe-Weimar, and Catherine of Brandenburg-Küstrin. After him is Juan de Fuca.