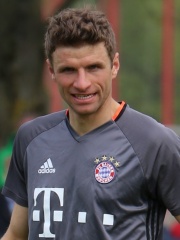 Thomas Müller (German pronunciation: [ˈtoːmas ˈmʏlɐ]; born 13 September 1989) is a German professional footballer who plays for Bundesliga club Bayern Munich and the Germany national team. A versatile player, Müller plays as a midfielder or forward, and has been deployed in a variety of attacking roles – as an attacking midfielder, second striker, centre forward and on either wing. He has been praised for his positioning, teamwork and stamina, work-rate, and has shown consistency in both scoring and creating goals. Read more on Wikipedia

Since 2007, the English Wikipedia page of Thomas Müller has received more than 5,110,988 page views. His biography is available in 77 different languages on Wikipedia making him the 587th most popular soccer player.