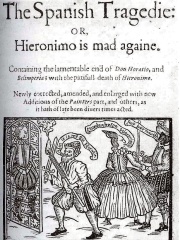 Thomas Kyd (baptised 6 November 1558; buried 15 August 1594) was an English playwright, the author of The Spanish Tragedy, and one of the most important figures in the development of Elizabethan drama. Although well known in his own time, Kyd fell into obscurity until 1773 when Thomas Hawkins, an early editor of The Spanish Tragedy, discovered that Kyd was named as its author by Thomas Heywood in his Apologie for Actors (1612). Read more on Wikipedia

Among people born in 1558, Thomas Kyd ranks 5. Before him are Michael the Brave, Maximilian III, Archduke of Austria, Ishikawa Goemon, and Hendrik Goltzius. After him are Oda Nobutaka, Robert Greene, and Thomas Lodge. Among people deceased in 1594, Thomas Kyd ranks 8. Before him are Tintoretto, Orlande de Lassus, Gerardus Mercator, Ishikawa Goemon, Archduchess Eleanor of Austria, and Martin Frobisher. After him are Bálint Balassi and Alonso de Ercilla.