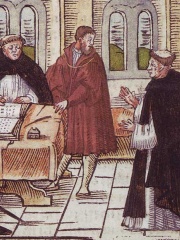 Thomas Cajetan (; 20 February 1469 – 9 August 1534), also known as Gaetanus, commonly Tommaso de Vio or Thomas de Vio, was an Italian philosopher, theologian, cardinal (from 1517 until his death) and the Master of the Order of Preachers 1508-18. Read more on Wikipedia

Since 2007, the English Wikipedia page of Thomas Cajetan has received more than 99,316 page views. His biography is available in 25 different languages on Wikipedia making him the 386th most popular philosopher.

Among people born in 1469, Thomas Cajetan ranks 5. Before him are Niccolò Machiavelli, Manuel I of Portugal, Guru Nanak, and Gian Galeazzo Sforza. After him are John Fisher and Rodrigo de Triana. Among people deceased in 1534, Thomas Cajetan ranks 6. Before him are Pope Clement VII, Hafsa Sultan, Antonio da Correggio, Alfonso I d'Este, Duke of Ferrara, and Chaitanya Mahaprabhu. After him are Marcantonio Raimondi, Philippe Villiers de L'Isle-Adam, Otto Brunfels, Antonio da Sangallo the Elder, Barbara Jagiellon, and Beatriz Galindo.