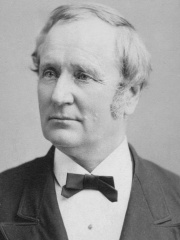 Thomas Andrews Hendricks (September 7, 1819 – November 25, 1885) was an American politician and lawyer from Indiana who served as the 16th governor of Indiana from 1873 to 1877 and the 21st vice president of the United States from March until his death in November 1885. Hendricks represented Indiana in the U.S. House of Representatives (1851–1855) and the U.S. Senate (1863–1869). He also represented Shelby County, Indiana, in the Indiana General Assembly (1848–1850) and as a delegate to the 1851 Indiana constitutional convention. Read more on Wikipedia

Page views of Thomas A. Hendricks by language

Among politicians, Thomas A. Hendricks ranks 8,672 out of 15,577. Before him are Lucius Scribonius Libo, Ada of Caria, Patrick Henry, Väinö Tanner, Nebojša Radmanović, and Wilhelm Ohnesorge. After him are Conrad II, Duke of Swabia, Vladimir of Novgorod, George II of Bulgaria, Rahotep, Zheng Jing, and Mihailo Vojislavljević.