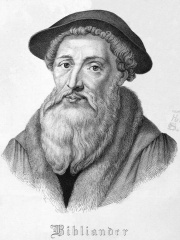 Theodore (or Theodorus) Bibliander (German: Theodor Buchmann; 1509 in Bischofszell – 26 September 1564 in Zurich) was a Swiss orientalist, publisher, Protestant reformer and linguist. Born Theodor Buchmann (Bibliander is a Greek translation of this surname) in Bischofszell, he studied Latin under Oswald Myconius, and Greek and Hebrew under Jakob Ceporin, and attended lectures in Basel between 1525–7 given by Johannes Oecolampadius and Konrad Pelikan. He also became familiar with the Arabic language and other languages from the East; he became a professor of theology. Read more on Wikipedia

Among writers, Theodore Bibliander ranks 3,025 out of 5,794. Before him are James A. Michener, Xiao Hong, Walter Map, Claude Farrère, Jorge Isaacs, and Esaias Tegnér. After him are David Lagercrantz, Cemal Süreya, László Krasznahorkai, Labīd, Gregory Benford, and Jean-Jacques Barthélemy.