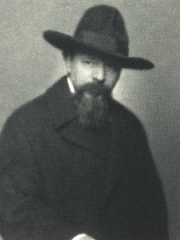 Theodor Lessing (8 February 1872, Hanover – 31 August 1933, Marienbad) was a German Jewish philosopher. He is known for opposing the rise of Hindenburg as president of the Weimar Republic and for his classic on Jewish self-hatred (Der jüdische Selbsthaß), a book which he wrote in 1930, three years before Adolf Hitler came to power, in which he tried to explain the phenomenon of Jewish intellectuals who incited antisemitism against the Jewish people and who regarded Judaism as the source of evil in the world. Lessing's political ideals, as well as his Zionism made him a very controversial person during the rise of Nazi Germany. Read more on Wikipedia

Among philosophers, Theodor Lessing ranks 767 out of 1,081. Before him are William of Conches, Maximus of Ephesus, Symon Budny, Johannes Agricola, Kazimierz Łyszczyński, and Friedrich Pollock. After him are Luigi Guido Grandi, Bernard Williams, Dietrich von Hildebrand, Stephen Toulmin, Crantor, and Vazgen I.