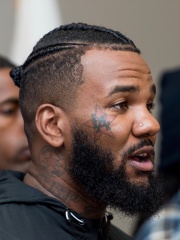 Jayceon Terrell Taylor (born November 29, 1979), better known by his stage name the Game or simply Game, is an American rapper. Born in Compton, California, he initially released a series of mixtapes under the wing of fellow West Coast rapper JT the Bigga Figga. After releasing his debut independent album Untold Story in 2004, he was eventually discovered by record producer Dr. Read more on Wikipedia

Page views of The Games by language

Among musicians, The Game ranks 1,711 out of 2,662. Before him are Brian Robertson, Dickey Betts, Zak Starkey, Gerry Marsden, Sam Jones, and Michael Amott. After him are Larry Adler, Tomatito, Laurent Garnier, Butch Vig, Howard Donald, and Nikolai Lugansky.