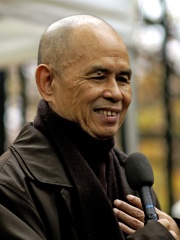 Thích Nhất Hạnh (; Vietnamese: [tʰǐk̟ ɲə̌t hâjŋ̟ˀ] (listen); born as Nguyễn Xuân Bảo on October 11, 1926) is a Vietnamese Thiền Buddhist monk and peace activist, founder of the Plum Village Tradition. Thích Nhất Hạnh spent most of his later life residing in the Plum Village Monastery in southwest France, travelling internationally to give retreats and talks. He coined the term "Engaged Buddhism" in his book Vietnam: Lotus in a Sea of Fire. Read more on Wikipedia

Since 2007, the English Wikipedia page of Thích Nhất Hạnh has received more than 1,370,275 page views. His biography is available in 35 different languages on Wikipedia making him the 570th most popular religious figure.

Among religious figures, Thích Nhất Hạnh ranks 572 out of 2,001. Before him are Pope Eugene I, Abbas ibn Ali, Penitent thief, Paulo Miki, Muhammad al-Jawad, and John of God. After him are Clotilde, Julia of Corsica, John of Capistrano, Zaynab bint Ali, Holofernes, and Hans Küng.