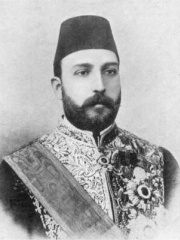 Mohamed Tewfik Pasha (Arabic: محمد توفيق باشا‎ Muḥammad Tawfīq Bāshā; April 30 or November 15, 1853 – January 7, 1892), also known as Tawfiq of Egypt, was khedive of Egypt and the Sudan between 1879 and 1892 and the sixth ruler from the Muhammad Ali Dynasty. Read more on Wikipedia

Tewfik Pasha was a Turkish military officer who served as the Ottoman Empire's last Grand Vizier from 1876 to 1877. He is most famous for his role in the Russo-Turkish War of 1877–78, during which he led the Ottoman army to victory against the Russian Empire.

Among politicians, Tewfik Pasha ranks 4,047 out of 15,710. Before him are Louis Henri, Duke of Bourbon, Mike Pompeo, Victor Klemperer, Ivanoe Bonomi, Drusus Caesar, and John Maurice, Prince of Nassau-Siegen. After him are Mathieu Kérékou, Francis Walsingham, Princess Theodora of Greece and Denmark, William I, Duke of Aquitaine, Louis III of Anjou, and Valerius Valens.