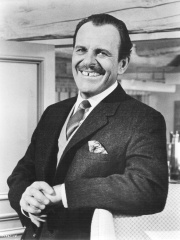 Terry-Thomas (born Thomas Terry Hoar Stevens; 10 July 1911 – 8 January 1990) was an English comedian and character actor who became known to a worldwide audience through his films during the 1950s and 1960s. He often portrayed disreputable members of the upper classes, especially cads, toffs and bounders, using his distinctive voice; his costume and props tended to include a monocle, waistcoat and cigarette holder. Read more on Wikipedia

Since 2007, the English Wikipedia page of Terry-Thomas has received more than 1,312,850 page views. His biography is available in 17 different languages on Wikipedia making him the 2,207th most popular actor.

Page views of Terry-Thomas by language