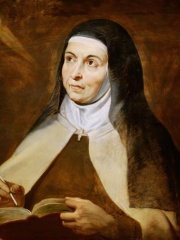 Teresa of Ávila, born Teresa Sánchez de Cepeda y Ahumada, also called Saint Teresa of Jesus (28 March 1515 – 4 or 15 October 1582), was a Spanish noblewoman who felt called to convent life in the Catholic Church. A Carmelite nun, prominent Spanish mystic, religious reformer, author, theologian of the contemplative life and of mental prayer, she earned the rare distinction of being declared a Doctor of the Church, but not until over four centuries after her death. Active during the Catholic Reformation, she reformed the Carmelite Orders of both women and men. Read more on Wikipedia

Since 2007, the English Wikipedia page of Teresa of Ávila has received more than 2,051,227 page views. Her biography is available in 63 different languages on Wikipedia making her the 13th most popular religious figure.

Page views of Teresa of Ávilas by language

Among religious figures, Teresa of Ávila ranks 105 out of 2,001. Before her are Agatha of Sicily, Saint Dominic, Pope Pius II, Pope Pius VIII, Pope Pius VI, and Muhammad al-Bukhari. After her are Saint Christopher, Pope Boniface VIII, Pope Clement I, Daniel, Esther, and Pope Leo XII.