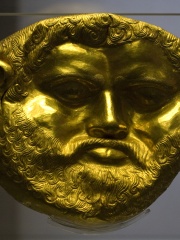 Teres I (Greek: Τήρης, Ancient Greek: [tɛ́ːrɛːs]; reigned 460–445 BC) was the first king of the Odrysian kingdom of Thrace. Thrace had nominally been part of the Persian empire since 516 BC during the rule of Darius the Great, and was re-subjugated by Mardonius in 492 BC.The Odrysian state was the first Thracian kingdom that acquired power in the region, by the unification of many Thracian tribes under a single ruler, King Teres probably in the 460's after the Persian defeat in Greece. Teres, who united the 40 or more Thracian tribes under one banner, was well known for his military abilities and spent much of his life on the battlefield. He died during a military campaign in 445 BC. Read more on Wikipedia

Since 2007, the English Wikipedia page of Teres I has received more than 54,210 page views. His biography is available in 19 different languages on Wikipedia. Teres I is the 10,770th most popular politician (down from 10,461st in 2019), the 132nd most popular biography from Bulgaria (down from 119th in 2019) and the 67th most popular Bulgarian Politician.

Page views of Teres IS by language

Among politicians, Teres I ranks 10,770 out of 15,710. Before him are Iufni, Apolinario Mabini, Víctor Balaguer i Cirera, Robert Byrd, Lydia Wideman, and John Warner. After him are Pantelis Karasevdas, Mohamed Ould Ghazouani, Khentkaus III, Pietro Participazio, Erich Ollenhauer, and Sadri Maksudi Arsal.

Others Deceased in 445 BC