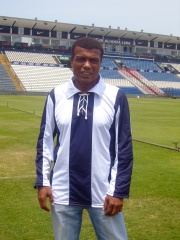 Teófilo Juan Cubillas Arizaga (Spanish pronunciation: [teˈofilo kuˈβiʎas]; born 8 March 1949) is a Peruvian former footballer who played as an attacking midfielder. He was selected as Peru's greatest ever player in an IFFHS poll, in which he was also included in the world's Top 50. He was renowned for his technique, shooting ability and free kick ability.Nicknamed El Nene (The Kid), he was part of the Peru national football team that won the 1975 Copa América. Read more on Wikipedia

Since 2007, the English Wikipedia page of Teófilo Cubillas has received more than 285,804 page views. His biography is available in 39 different languages on Wikipedia making him the 183rd most popular soccer player.