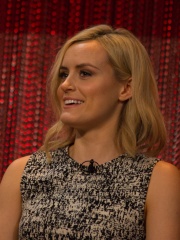 Taylor Jane Schilling (born July 27, 1984) is an American actress. She is known for her role as Piper Chapman on the Netflix original comedy-drama series Orange Is the New Black (2013–2019), for which she received a nomination for the Primetime Emmy Award for Outstanding Lead Actress in a Comedy Series and two Golden Globe Award nominations for Best Actress – Television Series Musical or Comedy and Best Actress – Television Series Drama. She made her film debut in the 2007 drama Dark Matter. Read more on Wikipedia

Among actors, Taylor Schilling ranks 4,970 out of 10,030. Before her are John Hodiak, Allison Mack, Bibi Besch, Donna Mills, Laverne Cox, and Wendie Malick. After her are Erick Avari, Hippolyte Girardot, William Zabka, Can Yaman, Tess Harper, and A Martinez.