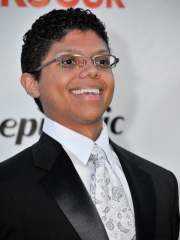 Adam Nyerere Bahner (born May 21, 1982), better known by the pseudonym Tay Zonday or as "Chocolate Rain Guy", is an American singer, songwriter, voice actor, and YouTube personality.He is known for his bass singing voice. He garnered mainstream exposure when his song "Chocolate Rain" became a viral video in July 2007. Read more on Wikipedia

Since 2007, the English Wikipedia page of Tay Zonday has received more than 763,640 page views. His biography is available in 27 different languages on Wikipedia making him the 2,209th most popular musician.

Among musicians, Tay Zonday ranks 2,215 out of 2,258. Before him are High Contrast, Lianne La Havas, Panda Bear, Greyson Chance, Andy C, and Wolfgang Van Halen. After him are Kevin Rudolf, Nina Gordon, Matt Cardle, Katy B, Neko Case, and Flume.