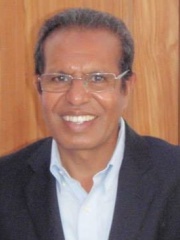 José Maria Vasconcelos GColIH (born 10 October 1956), popularly known by his nom de guerre Taur Matan Ruak (Tetum for "Two Sharp Eyes") is an East Timorese politician who has served as the Prime Minister of East Timor since 22 June 2018. He was also President of East Timor from 20 May 2012 to 20 May 2017. Before entering politics, he was the Commander of the FALINTIL-Forças de Defesa de Timor-Leste (F-FDTL), the military of East Timor, from 2002 until 6 October 2011. Read more on Wikipedia

Since 2007, the English Wikipedia page of Taur Matan Ruak has received more than 156,786 page views. His biography is available in 34 different languages on Wikipedia making him the 8,808th most popular politician.

Among politicians, Taur Matan Ruak ranks 8,762 out of 14,801. Before him are Albert II, Duke of Bavaria, Adib Shishakli, Mahendra of Nepal, Princess Augusta Sophia of the United Kingdom, Dámaso Berenguer, and Jakaya Kikwete. After him are Jiong of Xia, Shamshi-Adad IV, Apolinario Mabini, Infanta Maria of Guimarães, Sobekhotep VI, and Hiệp Hòa.

Others born in Timor-Leste

Among POLITICIANS In Timor-Leste