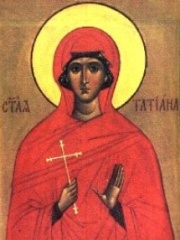 Saint Tatiana was a Christian martyr in 3rd-century Rome during the reign of Emperor Severus Alexander. According to legend, she was the daughter of a Roman civil servant who was secretly Christian, and raised his daughter in the faith. This was dangerous, and one day the jurist Ulpian captured Tatiana and attempted to force her to make a sacrifice to Apollo. Read more on Wikipedia

Page views of Tatiana of Romes by language

Among religious figures, Tatiana of Rome ranks 1,124 out of 2,272. Before her are Jubal, Moses ben Jacob Cordovero, Jayadeva, Theodulf of Orléans, John Ball, and Anan ben David. After her are George Sphrantzes, Adalard of Corbie, Pope Peter I of Alexandria, Rimbert, Peter the Venerable, and Catherine de Vivonne, marquise de Rambouillet.