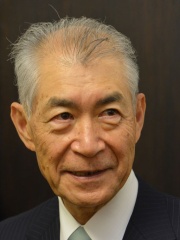 Tasuku Honjo (本庶 佑, Honjo Tasuku, born January 27, 1942) is a Japanese physician-scientist and immunologist. He shared the 2018 Nobel Prize in Physiology or Medicine and is best known for his identification of programmed cell death protein 1 (PD-1). He is also known for his molecular identification of cytokines: IL-4 and IL-5, as well as the discovery of activation-induced cytidine deaminase (AID) that is essential for class switch recombination and somatic hypermutation.He was elected as a foreign associate of the National Academy of Sciences of the United States (2001), as a member of German Academy of Natural Scientists Leopoldina (2003), and also as a member of the Japan Academy (2005). In 2018, he was awarded the Nobel Prize in Physiology or Medicine along with James P. Read more on Wikipedia