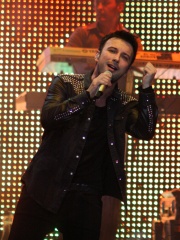 Tarkan Tevetoğlu (Turkish pronunciation: [taɾˈkan teveˈtoːɫu]; born 17 October 1972) is a Turkish-German singer-songwriter. Since the early 1990s, with the successful sales of his albums, he has been a prominent figure of the Turkish pop music, being known in both Turkey and Europe. Tarkan was born and raised in Alzey, Rhineland-Palatinate. Read more on Wikipedia

Since 2007, the English Wikipedia page of Tarkan has received more than 57,545 page views. His biography is available in 53 different languages on Wikipedia making him the 232nd most popular singer.

Page views of Tarkans by language

Among singers, Tarkan ranks 232 out of 3,001. Before him are Desireless, Dionne Warwick, Mariska Veres, Sam Cooke, Robbie Williams, and Beyoncé. After him are Sade, Chris Cornell, Frida Boccara, Van Morrison, Sonny Bono, and Lil Wayne.