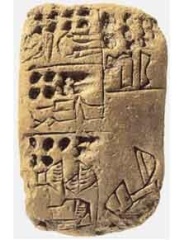 Tapputi, also referred to as Tapputi-Belatekallim ("Belatekallim" refers to female overseer of a palace), is considered to be the world’s first recorded chemist, a perfume-maker mentioned in a cuneiform tablet dated around 1200 BC in Babylonian Mesopotamia. She used flowers, oil, and calamus along with cyperus, myrrh, and balsam. She added water or other solvents then distilled and filtered several times. Read more on Wikipedia

Tapputi is famous for being the goddess of weaving. She is the daughter of the creator goddess Amma and the god of the earth, Enki.

Page views of Tapputis by language

Among people born in 1200 BC, Tapputi ranks 9. Before her are Ramesses V, Ramesses XI, Ramesses IV, Tiglath-Pileser I, Ramesses VIII, and Smendes. After her are Herihor, Di Yi, Wen Ding, Jizi, Geng Ding, and Wu Yi of Shang.