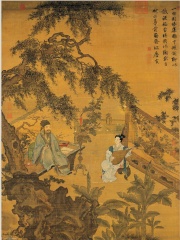 Tang Yin (Chinese: 唐寅; pinyin: Táng Yín; Cantonese Yale: Tong Yan; 1470–1524), courtesy name Bohu (伯虎), was a Chinese painter, calligrapher, and poet of the Ming dynasty period. Even though he was born during the Ming dynasty, many of his paintings, especially those of people, were illustrated with elements from Pre-Tang to Song dynasty art.Tang Yin is one of the most notable painters in the history of Chinese art. He is one of the "Four Masters of Ming dynasty” (Ming Si Jia), which also includes Shen Zhou (1427–1509), Wen Zhengming (1470–1559) and Qiu Ying (c. Read more on Wikipedia

Among people born in 1470, Tang Yin ranks 15. Before him are Francis, Count of Vendôme, György Dózsa, Isabella of Aragon, Duchess of Milan, Juan Díaz de Solís, Catherine of Navarre, and Lucrezia de' Medici. After him are Fernando de Rojas, Vincenzo Catena, João I of Kongo, Wen Zhengming, Bartolomeo Tromboncino, and Marco Basaiti. Among people deceased in 1524, Tang Yin ranks 13. Before him are Salaì, Isabella of Aragon, Duchess of Milan, Marko Marulić, Andrea Solari, Pierre Terrail, seigneur de Bayard, and Hans Holbein the Elder. After him are Catherine of Saxony, Archduchess of Austria, Johann von Staupitz, Cristóbal de Olid, Ğazı I Giray, Thomas Howard, 2nd Duke of Norfolk, and Thomas Linacre.

Among PAINTERS In China