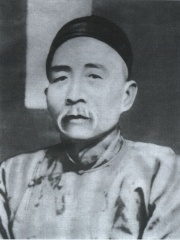 Tang Jingsong (Chinese: 唐景崧; Wade–Giles: T'ang Ching-sung; 1841–1903) was a Chinese general and statesman. He commanded the Yunnan Army in the Sino-French War (August 1884–April 1885), and made an important contribution to Qing dynasty China's military effort in Tonkin (northern Vietnam) by persuading the Black Flag leader Liu Yongfu to serve under Chinese command. His intelligent, though ultimately unsuccessful, direction of the Siege of Tuyên Quang (November 1884–March 1885) was widely praised. Read more on Wikipedia

Among politicians, Tang Jingsong ranks 10,601 out of 15,710. Before him are Licinianus, Georg, Duke of Saxe-Altenburg, Thomas Fairfax, Söyembikä of Kazan, Koppány, and Ernest von Koerber. After him are Jerome Powell, Parshatatar, Frederick North, Lord North, Mostafa El-Nahas, Jacinda Ardern, and Alamgir II.