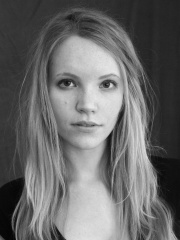 Tamzin Merchant (born 4 March 1987) is an English actress and author, best known for her roles as Georgiana Darcy in the film Pride & Prejudice (2005), as Catherine Howard in the Showtime series The Tudors (2009–2010) and as Anne Hale in the WGN America series Salem (2014–2017). She wrote the 2021 children's book The Hatmakers. Read more on Wikipedia

Among actors, Tamzin Merchant ranks 7,959 out of 9,996. Before her are Romola Garai, Janet Montgomery, Sōichirō Hoshi, Edmund Lowe, Yeon Woo-jin, and Auliʻi Cravalho. After her are Will Forte, Itatí Cantoral, Kristy McNichol, Angus T. Jones, William Moseley, and Hahm Eun-jung.