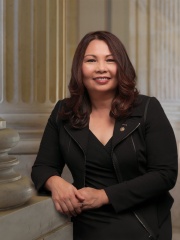 Tammy Duckworth (born March 12, 1968) is an American politician and a former U.S. Army lieutenant colonel serving as the junior United States Senator from Illinois since 2017. A member of the Democratic Party, she represented Illinois's 8th district in the United States House of Representatives from 2013 to 2017. Duckworth was educated at the University of Hawaii and the Elliott School of International Affairs at George Washington University. A combat veteran of the Iraq War, she served as a U.S. Read more on Wikipedia

Since 2007, the English Wikipedia page of Tammy Duckworth has received more than 4,174,806 page views. Her biography is available in 21 different languages on Wikipedia making her the 14,288th most popular politician.