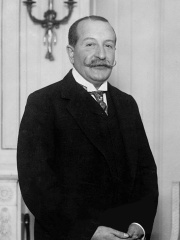 Take or Tache Ionescu (Romanian pronunciation: [ˈtake joˈnesku]; born Dumitru Ghiță Ioan and also known as Demetriu G. Ionnescu; 25 October [O.S. 13 October] 1858 – 21 June 1922) was a Romanian centrist politician, journalist, lawyer and diplomat, who also enjoyed reputation as a short story author. Starting his political career as a radical member of the National Liberal Party (PNL), he joined the Conservative Party in 1891, and became noted as a social conservative expressing support for several progressive and nationalist tenets. Ionescu is generally viewed as embodying the rise of middle-class politics inside the early 20th century Kingdom of Romania (occasionally described as Takism), and, throughout the period, promoted a project of Balkan alliances while calling for measures to incorporate the Romanian-inhabited Austro-Hungarian regions of Transylvania, Banat and Bukovina. Read more on Wikipedia