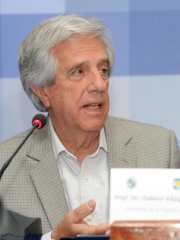 Tabaré Ramón Vázquez Rosas (Spanish pronunciation: [taβaˈɾe raˈmom ˈbaskes ˈrosas]; born 17 January 1940) is a Uruguayan politician who served as the 41st President of Uruguay from 2015 to 2020. He previously served as President from 2005 to 2010 as the 39th officeholder. Read more on Wikipedia

Since 2007, the English Wikipedia page of Tabaré Vázquez has received more than 637,178 page views. His biography is available in 53 different languages on Wikipedia making him the 1,438th most popular politician.

Among politicians, Tabaré Vázquez ranks 1,431 out of 14,801. Before him are Joachim Gauck, Leo von Caprivi, Paul-Henri Spaak, Gudea, Conrad of Montferrat, and Felix Yusupov. After him are Ehud Olmert, Pauline Bonaparte, John Tyler, Emperor Taizu of Song, Vasili IV of Russia, and Elisa Bonaparte.